For centuries, Christians across the world have shared a beautiful Epiphany tradition and blessing. This tradition – called ‘chalking the doors’ – invites God’s presence and blessing on our homes and all who live and enter them, on the feast of the Epiphany (6 January) and start of a new year. Mission Together have adapted this tradition to create an Epiphany liturgy and blessing for schools. You can view and download this resource here.

On 16th December 2019, the Holy Father Francis received in audience, in the Vatican Apostolic Palace, a representation from Italian Catholic Action, for the exchange of Christmas wishes. The following is an extract from the Pope’s greeting to those present:

It is always nice to welcome you on the occasion of the Holy Nativity. I greet you with affection and ask you to pass on my greeting and Christmas wishes to all the boys and girls of Catholic Action that you represent.

I thank you for your visit, for your good wishes and especially for your prayers. And I renew them with the hope that the Saviour will make complete the joy that I see on your faces today…

I leave you a task to do at home: on Christmas Day, gather in prayer and, with the same wonder as the shepherds, look at the Child Jesus, Who came into the world to bring God’s love, Who makes all things new. With His birth, Jesus made Himself a bridge between God and mankind, reconciled earth and sky, and recomposed the whole human race in unity.

I ask Mary, the Mother of Jesus and our Mother, to accompany your journey. I recommend that you learn from her what it means to say: “Christmas”. She and Saint Joseph can truly teach us how to accept Jesus, how to adore Him and how to follow Him day by day. I bless you and all the boys and girls of the ACR. And you, please, do not forget to pray for me. Thank you!”

Photo by Mick Haupt on Unsplash

Advent 2019 begins the Year of the Word, The God Who Speaks, an initiative Catholic Bishops’ Conference. In support we’ve revised our Advent liturgies, to encouraging deeper exploration of seasonal scriptures.

You can find our St Nicholas resources on this webpage too, for a catechetical spin on the Santa Claus story.

The image above is from Holy Family Parish Church. The village of Po Kan Bay in the Yangon diocese is home to around 500 people. To address the spiritual, educational and medical needs of this growing community, Missio supporters contributed funds for the construction of a church. The Holy Family Church has become the hub of the village. It’s a space for people to live their faith on a daily basis, as well as providing education classes and a medical clinic within its walls. Click to read more.

We’ve been delighted with the response to the Extraordinary Month of Mission from schools across the country. There are too many wonderful images and stories to mention, but you can view some by visiting our Twitter feed @MissioUK. We are very grateful for all your EMM efforts, especially those of Mrs Angela Filarowski, RE Lead and Teacher at St Peter and St Paul Catholic Primary, Yeadon.

Angela composed a beautiful hymn ‘This is Our Mission’ for the children at St Peter and St Paul – pupils are pictured here singing the hymn at their special school and parish EMM Liturgy. Angela has generously allowed us to publish ‘This is Our Mission’ music and lyrics for use in other schools, click here to download via our EMM webpage. We recommend you take a look at what could well become our Mission Together song. It’s beautiful!

This year, Clifton Diocese is celebrating ‘A Year of Prayer’ and, encouraged by the Deputy Director for Schools and Colleges, Ann Fowler, schools have been taking part by linking prayer with action.

Pope Francis’ charity for overseas mission, Missio and its children’s branch, Mission Together, asks children to put their faith into action by praying for, and sharing with, children living in poverty overseas. So, for Ann, it was appropriate to set schools the challenge to raise £10,000 between them for Mission Together.

Ann and her husband, Tony, have given themselves the task of walking the Cotswold Way Challenge – a walk of 50 kilometres in less than 14 hours!

Ann told us, ‘If we are asking schools to put their time and effort into supporting the respective charities it is important for us to show we are willing to do the same. We would also like the work of Mission Together to be more widely known.’

The Walk takes place on 29 June and Ann hopes that children from schools in the diocese will turn out to cheer her on. You can sponsor Ann by visiting the link below:

Good luck to you both. We are sure the children of Clifton diocese are very proud of you!

Did you know our mission to raise awareness of the call to share God’s love now extends into secondary schools too? Our parent charity Missio, produce resources throughout the year, and for Lent 2018 have produced downloadable Stations of the Cross.

Praying the Station of the Cross is a powerful way to identify Christ’s suffering with our own and that of the world. These accessible and simple stations encourage young people to reflect on the lessons communicated through Jesus’ journey to the cross and apply them to contemporary issues.

In addition to Stations of the Cross, Missio has also produced a series of assemblies to accompany each week of Lent. These explore the meaning of Lent with reference to scripture, mission, and Catholic Social Teaching (CST). Visit our parent site missio.org.uk to download these resources.

“Dear children, our hands are a symbol for our hearts and only open, generous hearts can change the world.” Pope Francis

Why does God let children suffer? How can kids change the world? And how can they overcome their fear of growing up?

Those were the soul-searching questions that three children asked Pope Francis during a meeting with members of an organisation for middle school students called ‘I Cavalieri’ or The Knights. The colourful encounter included young knights from all over Italy, along with groups from Spain, Portugal, France and Switzerland, plus others linked up online from Latin America.

After lots of lively singing and cheering, a young girl named Marta asked a first question about how to overcome her fear of moving to high school and saying goodbye to all her current friends.

The Pope told her that life is a continual round of big and small ‘hellos and goodbyes’. We grow up, he said, by making new friends and letting go of old ones. Don’t be frightened, he said, but try to see it as a challenge. Don’t worry about what’s behind the wall, but imagine instead a horizon you can see in the countryside and try to always move forward towards your new horizons.

A second child, Giulio, asked the Pope how young people can help change the world for the better.

Getting the kids to shout out answers, Pope Francis asked what happens if they have two sweets and a friend comes to call? And if they only have one sweet? Do you put it in your pocket and eat it later? Or do you share what you have with others? Show me your hands, he instructed the kids: are they closed and selfish, or open and generous? Our hands are a symbol for our hearts, he said, and only open, generous hearts can change the world.

If you have a friend at school that you don’t like, the Pope went on, don’t go and gossip about that person with others, because that shows you have a closed heart. If someone insults you, don’t insult them back, but try and change the world with small, every day, acts of generosity and solidarity. Jesus taught us to pray for our friends and our enemies, for those who make us suffer, he said, just as Our Father in heaven makes the sun shine upon good and bad people.

Finally a young Bulgarian boy, Tanio, told the Pope how he’d been abandoned in an orphanage and adopted by Italian parents at five years old. His new mum died a year later, leaving his dad and grandparents to look after him. Now his grandparents have died too, so he asked the Pope: How can we believe that God loves us when we lose people in this way?

Pope Francis confessed that he too asks the same question when he visits sick children in hospital. How can we believe in God’s love when we see kids suffer from hunger in some parts of the world, while so much food is wasted in other places? There are simply no words to answer these questions, he told his young audience. The only explanation you may find is in the love of those who support and care for you.

God doesn’t answer my questions either, he admitted, but when I look at the Cross and remember that God let his own Son suffer, I know that there must be a sense to it somewhere. I can’t explain it to you, he said, but you may find it on your own. Remember, he concluded, there are questions and situations in life which cannot be explained, yet the love of God is always there, and people around you can help you feel his presence in your life. 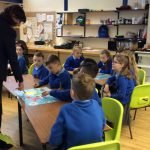 Year of the Word

Wednesday Word provides a great and easy way for schools to engage with The Year ... Read More

A short film for children explaining the role of an overseas missionary.

Mission Together materials complement all Catholic RE programmes, uphold Catholic teaching, and are mindful of requirements within the Common Inspection Framework.
Click Here!