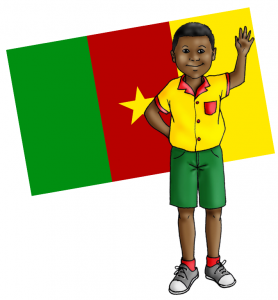 Cameroon is a country in the continent of Africa. It has desert in the north, mountains and grasslands in the central regions, and tropical rain forests in the south. The country has hot temperatures all year-round.

Humans have lived in Cameroon for at least 50,000 years! Today Cameroon is home to over 25,000,000 people. People from Cameroon are called Cameroonians. Almost 50% of Cameroonians live in the countryside and work as farmers. Sadly, many of these farmers live in poverty.

There are over 250 languages spoken in Cameroon, but English and French are the official languages. That is because after the first World War, Cameroon was divided into French and British zones.

Sadly, in recent times there has been fighting between French and English-speaking groups. Many Cameroonians have had to leave their homes to move to safer areas. As a result, some schools have had to grow to make room for new pupils.

The pupils below are singing a thank you song, as Mission Together helped their community to build four new classrooms. Listen carefully to the words of the song and its lesson about happiness.