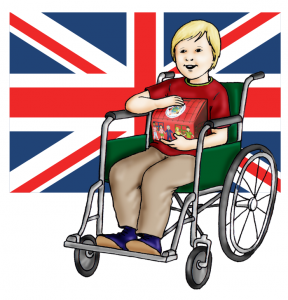 The United Kingdom (UK) is an unusual country because it is a country made up of four separate nations (England, Wales, Scotland and Northern Ireland). The UK is in the continent of Europe.

Over hundreds of years, waves of people, including Romans, Vikings, French and Irish people, immigrated to the UK. In the 1950s and 1960s, people from the Caribbean, Africa, and Asia came to the UK to live and work too. This means that today the people of the UK have ancestors from all across the world! That is worth celebrating!

Mission Together encourages children in England and Wales to pray and share, so that children around the world know that God our Father loves everyone, everywhere. That’s why 9-year-old Alfie donated his pocket money to take part in his school’s Mission Together Mufti day. And it’s why he and his school chaplaincy team made a giant Mission Rosary, so they could pray together for children around the world.

There are children in schools all over the United Kingdom who support Mission Together through praying and sharing, like the pupils below who asked us to share this special Christmas greeting with children around the world.