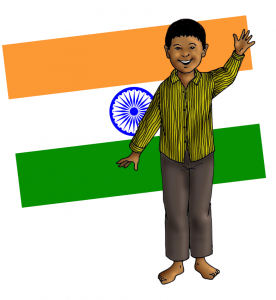 India is a huge country in the continent of Asia. Most of India forms a peninsula, which means it is surrounded by water on three sides. It has the second largest population in the world! The people in India are born into groups called castes. The ‘caste’ a person is born into will decide what job a person can do, where they live, even who they can marry. People born into a lower caste, or no caste at all, are often very poor and unable to make their situation better.

People from India are called Indians. Its official languages are Hindi and English, though there are another 21 official languages too! Most people in India follow the Hindu faith, but there are Christians in India too. Some of these children are members of Mission Together clubs. To help children get to know Jesus better, members of the Mission Together clubs take part in Bible story telling events. Sometimes they use drama or dance to retell stories Jesus told.

The members donate some of their pocket money and pray the Mission Rosary so that God’s love might reach to everyone, everywhere! Listen to these children pray the Our Father in Konkani – their native language. Konkani is one of 22 official languages spoken in India! Are their any words you can recognise? Can you learn to pray the Our Father in another language?