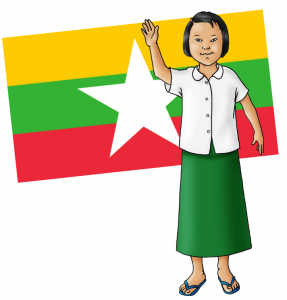 Myanmar is a country in the continent of Asia. Its full name is the Republic of the Union of Myanmar. It is also sometimes called Burma. Myanmar is the largest country in South East Asia that is not an island. Myanmar is a mountainous country with forests, dense jungle, fertile farmland. About 70% of the country’s population lives in rural areas and almost 50% are farmers.

People from Myanmar are called Burman and speak Burmese. Most Burmese practice Buddhism, but there are also Muslims and Christians in Myanmar too. Most of the people in Myanmar live in poverty. Because of this poverty, some children in rural areas are unable to attend school. To help, Mission Together is asking children in England and Wales to pray and to share, so that children in Myanmar can go to school and have a brighter future.

You can find out more about Myanmar and how Mission Together children in Australia are helping pupils in rural Myanmar by watching the film below. You can also download our special Myanmar Workbook below.

Mission Together in Myanmar