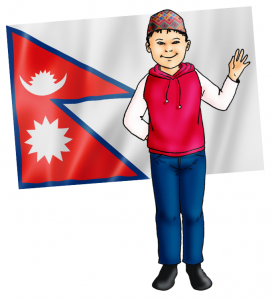 Nepal is a small, mountainous country in the continent of Asia, bordering China to the north and India to the south. The lowlands of Nepal are at sea level and the mountains of the Himalaya are the tallest in the world. The Himalaya formed 10–15 million years ago when India collided with the continent of Asia and pushed the land into high mountains. Eight of the world’s ten highest mountain peaks are in Nepal, including Mount Everest which is the world’s highest peak.

Nepal is one of the poorest countries in the world. Most people live in rural areas and work in farming. Nepali is the official language, but there are many other languages, including English. Hinduism is the main religion, but there are also many Buddhists. Legend even says that the Buddha, the man who started Buddhism, was born in Nepal in 623 B.C.

Nepal is also home to a small number of Christians; they try hard to share the love of God with as many people as they can. The children below attend a school that was built and is run by the Catholic Church, with help from the charity Mission Together. Not all the children in the school are Catholic, but at school they learn that Jesus taught us to love one another as brothers and sisters, with God the loving Father of everyone. Listen to the children as they sing about how we all need to work together to make our world better and fairer for all.