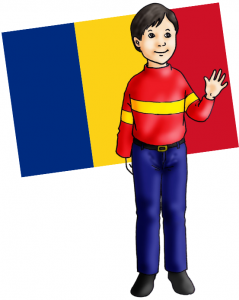 Romania is a country in the continent of Europe. Romania is a relatively mountainous country that has a very beautiful and green landscape. Sadly, Romania’s past isn’t so beautiful, due to the great suffering caused by some unfair and cruel leaders.

For many years Romanians had to live with poverty and fighting. Some people were attacked for their faith. But even when times were hard the people remained faithful and hopeful, believing that God would help them.

As members of their club the children promise to be missionary disciples by praying for the world, visiting the sick or elderly, offering food to poor people in their region, and donating some of their pocket money to support children around the world.

Listen to the children as they sing their Missionary Childhood hymn. The words tell of our duty to share the message of Jesus, so that together we can build God’s world of peace, mercy and love.