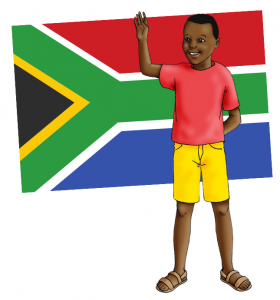 South Africa is a country in the continent of Africa and is about 5 times bigger than United Kingdom. Many different peoples make up South Africa, each with their own language and history, this gives South Africa its nickname “rainbow nation.” People have lived in South Africa longer than most countries on Earth. Archaeological objects prove that humans lived in the area more than 100,000 years ago! Sadly, there have been times of great unfairness and conflict in South Africa’s history.

In the 17th Century white settlers began to move into South Africa. Over time they demanded more land and more power. By 1906 South Africa’s government was run by these settlers who passed a shameful law that separated the population by race. This system of separation became known as apartheid.  Apartheid gave the white minority nearly all the political power, most of the land, and the best jobs. Thankfully apartheid ended in 1994, but over the years it caused many people to live in great hardship and poverty. Many of the people who helped to end apartheid were Christian. Through the teaching of Jesus, they understood that all people are God’s children and should be treated with dignity, love and respect.

Today almost 80% of South Africa are Christian, and 6% are members of the Catholic Church. Mission Together (called Missionary Childhood in many parts of Africa) has many supporters in South Africa. Some children are members of Mission Together clubs where they learn how, as God’s children, we are brothers and sisters who stand together as one family. To help Mission Together members get to know Jesus better, the children also use drama and song to retell stories Jesus told. Listen now as they sing a hymn about God’s love for all his children, everywhere.

Mission Together in South Africa