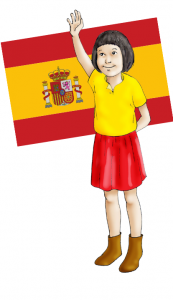 Spain is a country in the continent of Europe. It is home to Europe’s only desert but there is a huge variety of landscapes in the country, from snowy mountain ranges to sunny beaches. Spain has nearly 5000 km of coastline, making it one of the world’s most popular places to visit. But it’s not just people who like to visit Spain, as the country lies between Europe and Africa,it’s also an important resting spot for migratory birds like black stork, great-crested grebe, purple heron, cormorant, flamingo, and lots more.

The people of Spain are called Spaniards and the language they speak is Spanish. Spanish is the world’s second-most spoken language, spoken by the people of Argentina, Bolivia, Chile, Mexico, and many other South American countries. Over 90% of Spaniards are Christian, and most Christians are members of the Catholic Church. Many children in Spain are members of Missionary Childhood; called Mission Together in the UK. Listen out for these Spanish words below as Missionary Childhood members in the film below sing about their mission to bring God’s love to the world.

Soy bautizado  – I am baptised